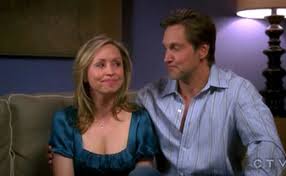 It’s all about the magic!

This is my favourite episode of the season mainly because it centres around that magical connection between a couple. I guess its because I have that magic with my boyfriend. Not only that but the development of the characters relationships with each other you really see them connect as a practice.

This episode is mainly about the main characters back stories reflected through their patient stories. Violet’s patient this episode is about making decisions himself and this is reflected through Violet in her decision whether she will move on from her relationship with her ex-boyfriend Alan. It brings up the issues of making changes in our lives and how as humans we are more inclined to continuity.

You also get a great insight into Naomi’s character. Through Dell’s cake feeding extravaganza you finally see a more human side to her. I felt at the start she is a little cold and rigid. Her breakdown is a classic sugar substitute for men.

Addison really starts to fit in in this episode through this hilarious/serious case of a woman’s ‘lady town’ is broken. Total Shonda quote from Grey’s Anatomy’s character Pierce. This sub story was full of comedy and this couple had that magic.

Cooper brought out his inner fairy which was hilarious to try and find out what was making these cute girls blue. I KNOW BLUE!

You also go deeper into Pete’s story which is so interesting I don’t know if its because he is sexy or the switch to alternative medicine. You get to know about his wife it wasn’t like Grey’s Anatomy with Addison’s hi I’m his wife Derek Shepherd situation its a sad story.

Overall, I love this episode mainly because it shows the human and comedic sides to the characters which is a difficult mix to meld together. Another great Private Practice episode showing the chill out side of Grey’s Anatomy.

I watched this yesterday and it was amazing! Three badass women and an incredible story! @thekitchenmovie is going in my top ten films for this year! Great for anyone who loves gangster and crime films! #film #thekitchenmovie