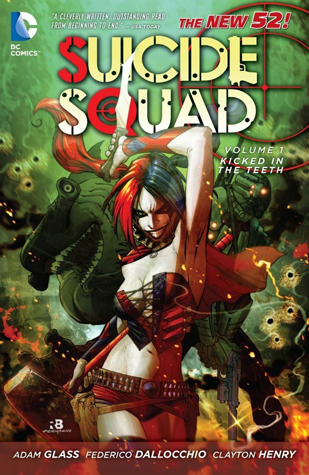 This follows the suicide squad who are criminals that have been rounded up by the government and have bombs in the back of their necks. They are sent on missions which they must complete or the bombs in their necks go off!

The artwork was done in a classic comic book style which I loved mainly cause its so easy to follow but it also gives it a structure. Action is shown brilliantly through the artwork as the fight scenes are clearly defined and designed with a great pace. Overall, I think the artwork is explosive and sexy which you see in the fight scenes and the design of the characters.

The dialogue is snappy and fast paced which works perfectly for this comic as it is mainly about the action in the artwork which the dialogue compliments beautifully. There is also a lot of dry humour in the dialogue which I find hilarious and always makes me love stories even more.

My favourite character would have to Harley Quinn because she is so sassy and provocative but also I am fascinated by her back story. King Shark for me didn’t see much point to as a character although he may develop in later volumes. Deadshot I liked because he was great strong and dominant character in the story. El Diablo I really liked his character mainly because he was the conscious of the group and his powers were badass. Amanda Waller was exactly as I imagined bossy and in charge.

I really enjoyed this volume it was fun, fast paced, action packed and thrilling. Occasionally I got annoyed at the killing off of characters because it was quite abrupt at times. Overall, a thrill that will hopefully keep going throughout the volumes.

Don’t forget to say Hi to me on my Social Mediaring:
Twitter: https://twitter.com/EmilyCCannings

This beauty arrived on on my doorstep this week I am sooooooooo excited to read this book! In #houseofdragons there is a dragon empire I mean how cool is that! I feel like this is going to be the ultimate #dragon book so excited! @jesscluess @randomhouse @randomhousekids #bookstagram #bookmail