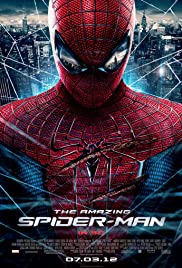 This Spider-Man starts the story from when his parents whisked him away in the middle of the night so that Peter can stay with his aunt and uncle but will they come back. He is frustrated at school as he is bullied. However, there is a girl Gwen Stacey who seems to melt all his problems away. She is also a whizz at science like him and interns at Oscorp. Where the trouble begins?

I love Spider-Man, he is one of my favourite superheroes I think because he comes from a place of misunderstanding and becomes something great but not because he wants to but by chance. I think I also have always loved each of his love interests they just have these great personalities and have this forbidden relationship between them that keeps you interested.

So out of all the Spider-Mans I have watched in my day Andrew Garfield isn’t my favourite. However, he does do that awkward and geeky look perfectly that you would totally fall in love with him yourself, well I did. However, he just doesn’t have that depth that I am looking for which comes up in some iconic scenes. He is what you would call a driven Spider-Man with some good wit to him plus he is so corny. I think this Spider-Man would have done perfectly in the 50s but nowadays I think Tom Holland is the perfect fit.

Gwen a character that I enjoy so much in this film as she is funny and smart plus she has some great scenes for example when she is telling off Flash or when she is talking to her dad before bed. Between her and Spider-Man there is definitely chemistry there that scene in her bedroom after he is hurt very well done but that is really it (could we not have more of that?). It is definitely more about the chase in this film.

The reptilian villain, The Lizard who was expecting that (not me). I like that the villain had two separate personalities in the film. As it made you almost root for him because you knew that there was more to the monster. I liked the parts where Dr. Curt Connors spent time with Peter as a father like relationship. The actual lizard slash dinosaur itself was cool and creepy although it remind me a lot of Godzilla but love the in joke.

The aunt and uncle where perfectly cast two of the best actors for those roles. Especially Sally Hawkins, she is just the most powerful actor I have ever seen. In terms of the plot it was well paced and had some great web scenes for Spider-Man especially that bit with the cranes. Although it did feel it was a little underdeveloped in terms of character relationships.

Overall, it is a good Spider-Man film that gives you a few tingles of that amazing character that has inspired so many people today to go for what they want in life. If you are looking for a good feel good film with a character you love try this.

Where you can Support Lebanon: https://helplebanon.carrd.co/

Don’t forget to say Hi to me on Social Media: Twitter:https://twitter.com/EmilyCCannings

Exploring What Captivates, Inspires, and Intrigues Us.

We are all in the gutter, but some of us are looking at the stars. Oscar Wilde